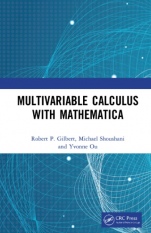 Multivariable Calculus with Mathematica is a textbook addressing the calculus of several variables. Instead of just using Mathematica to directly solve problems, the students are encouraged to learn the syntax and to write their own code to solve problems. This not only encourages scientific computing skills but at the same time stresses the complete understanding of the mathematics. Questions are provided at the end of the chapters to test the student's theoretical understanding of the mathematics, and there are also computer algebra questions which test the student's ability to apply their knowledge in non-trivial ways.

Ensures that students are not just using the package to directly solve problems, but learning the syntax to write their own code to solve problems Suitable as a main textbook for a Calculus III course, and as a supplementary text for topics scientific computing, engineering, and mathematical physics Written in a style that engages the students' interest and encourages the understanding of the mathematical ideas

"This is an absolutely first-rank textbook in multivariable calculus. This book is not only for undergraduate students, but is also a good reference for scientists, especially engineers. It not only discusses scientific computing skills, but also the complete understanding of calculus.

I particularly like the material in Chapters 7 and 8. These two chapters discuss Elements of tensor analysis and partial differential equations. These two chapters help students (and researchers) to build up a solid background for modern analysis. I highly recommend this book"
- Der-Chen Chang, McDevitt Chair in Mathematics and Computer Science and Senior Advisor to the Provost for China Initiatives, Georgetown University

"This is a well-designed textbook on undergraduate multivariable calculus covering all topics usually included in third year calculus courses. Carefully selected examples from mechanics and electromagnetic theory provide links between multivariable calculus and applied sciences, while the last two chapters cover elements of tensor analysis and partial differential equations, and can be used in high-level undergraduate and introductory graduate courses. An amazing feature of the book is an integrated collection of Mathematica sessions that help students to learn and understand basic concepts and methods."
- Alexander Pankov, Professor, Morgan State University

"This textbook for third semester students gains a lot from R.P. Gilbert's background as a scholar of both physics and mathematics as well as from his two co-authors, Y. Ou and M. Shoushani, who were his doctoral students and continue as his research associates today. Most of the Mathematica sessions in the book, and the numerous exercises and examples, are from mathematical physics. These examples provide useful information about physics, frequently ignored today, which helps in understanding their applications in mathematics. In addition to the standard content of multivariable calculus, tensor analysis and partial differential equations are also included."
- Heinrich Begehr, FU Berlin

Author Biography: Robert P. Gilbert is an applied analyst, who began studying function theoretic methods applied to partial differential equations. He and Jerry Hile originated the method of generalized hyperanalytic function theory. Professor Gilbert and James Buchanan applied this methodology to elastic materials. Further applications of the function theoretic method were made by Robert Gilbert, Steve Xu and James Buchanan to marine acoustics and inverse problems. From this point on Dr. Gilbert's research centered on bio-medical research, in particular the study of the rigidity of human bone and the disease osteoporosis. This research was twin pronged, part being focussed on cell-biology, with James Buchanan, and the other with Alex Panchenko on the homogenization of the micro-differential equations involved with bone mechanics. Further investigations were made in collaboration with Yvonne Ou and Michael Shoushani. Professor Gilbert became a full professor at Indiana University, Bloomington at the age of 34. At 43 he became the Unidell Foundation Chair of Mathematics at the University of Delaware. He has published over 300 articles in professional journals and conference proceedings. He is the Founding Editor of two mathematics journals Complex Variables and Applicable Analysis. M. Yvonne Ou is an applied mathematician specializing in inverse problems, computational mathematics and rational approximations. Prior to joining the faculty of the Department of Mathematical Sciences, where she is currently a tenured associate professor, she was a research scientist member of the Computational Mathematics Group in the Oak Ridge Laboratory. This is her first book. Michael Shoushani is an applied mathematician at Western Connecticut State University. His research interests are in transmission and inverse problems specifically related to poro-elasticity, partial differential equations, and numerical methods for partial differential equations. Professor Shoushani received his BA in mathematics from Western Connecticut State University and his MS and PhD both in Applied Mathematics from the University of Delaware.