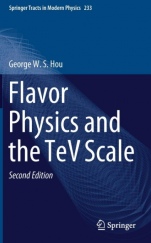 Flavor Physics and the TeV Scale

The second edition of this monograph discusses the usefulness of heavy flavor as a probe of TeV-scale physics, exploring a number of recently-uncovered "flavor anomalies" that are suggestive of possible TeV-scale phenomena. The large human endeavor at the Large Hadron Collider has not turned up any New Physics, except the last particle of the Standard Model, the Higgs boson. Revised and updated throughout, this book puts the first results from the LHC into perspective and provides an outlook for a new era of flavor physics. The author readdresses many questions raised in the first edition and poses new ones. As before, the experimental perspective is taken, with a focus on processes, rather than theories or models, as a basis for exploration, and two-thirds of the book is concerned with b -^ s or bs sb transitions. In the face of the advent of Belle II and other flavor experiments, this book becomes a part of a dialogue between the energy/collider and intensity/flavor frontiers that will continue over the coming decade. Researchers with an interest in modern particle physics will find this book particularly valuable.

Author Biography: George Hou received his degree in theoretical particle physics, and conducted research in USA, Germany and Switzerland for seven years before returning to Taiwan. He soon initiated an experimental group and jointed the Belle experiment at the Japanese B factory, pushing both hardware construction and physics analysis successfully. Since 2008, his focus switched to the CMS experiment at CERN LHC maintaining the tradition of both hardware and analysis arms. His experience thus bridges the gap between both particle phenomenology and experiment, as well as flavor and collider physics. He is currently University Chair professor at National Taiwan University, and also the Chair of AsiaHEP since 2015.