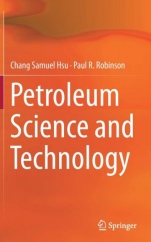 Aimed at students and professionals, this book covers every major aspect of petroleum: the origin of fossil hydrocarbons and their chemical/physical properties; discovering hydrocarbon reserves; recovering oil, gas, and bitumen; purifying gas; the chemical and physical characterization of crude oil; refining crudes into fuels and lubricants; and converting simple chemicals into solvents, polymers, fibers, rubbers, coatings, and myriad other products, including pharmaceuticals. Readers will learn how the industry operates, from "upstream" exploration and production, "midstream" transportation to "downstream" refining, and manufacturing of finished products. The book also contains unique chapters on midstream operations, learnings from major accidents, and safety/environmental laws and regulations. It builds on the authors' previous books and teaching material from a highly rated course that is taught at the Florida A&M University/Florida State University (USA).

Author Biography: Dr. Chang Samuel Hsu had over 32 year experience at ExxonMobil and BP before joining in Florida State University in 2010 to establish the Future Fuels Institute. He also established the Refinery of the Future Lab at BP. Currently, he is an Adjunct Professor at Department of Chemical and Biomedical Engineering of Florida A&M University/Florida State University teaching "Petroleum Science and Technololgy" and also at College of Chemical Engineering of the China University of Petroleum in Beijing teaching graduate level "Biorefinery". In 2012, he founded Petro Bio Consulting, LLC. Dr. Hsu was the first researcher to introduce ultrahigh resolution Fourier-transform ion cyclotron resonance mass spectrometry (FT-ICR MS) for in-depth molecular characterization of petroleum fractions. He was one of the pioneers to develop tandem mass spectrometry (MS/MS) at Exxon to provide an additional dimension for the determination of molecular structure of the components in complex mixtures. Dr. Hsu's research interests cover petroleum (both upstream and downstream), coal, shale and biomass oils. His current focuses are novel characterization of petroleum biomarkers for exploration and exploitation, and heavy hydrocarbon characterization for hydroprocessing, catalytic cracking, coking and fuels/lubes analyses. He also has extensive experience in environmental damage assessment and remediation for oil spills. During his 40 years in commercial energy, Dr. Paul Robinson visited more than 140 sites in 34 countries on 5 Continents, At nearly half of those sites, he led or participated in projects or provided operations support. He started his career at the Oak Ridge National Laboratory, where his research focused on generating hydrogen with thermochemical cycles for water-splitting. He then spent more than 30 years in various roles at Unocal, Chevron, and Shell. At Unocal, he developed hydrotreating catalysts, studies convresion of syngas to alcohols, and became Regional Manager for Japan and Southeast Asia on the technology licensing group. Along the way, he received two creativity awards and a patent achievement award. As a senior engineer at Chevron and Shell, he received several special recognition awards while providing process monitoring, operations support, and troubleshooting for commercial hydroprocessing units. At AspenTech. he became Advisor and Best Practice Leader for online optimization of hydrocracking units. In this role, he co-developed Aspen Hydrocracker which was based on a model developed by Sun Oil Company and implemented online. in 2016, he founded the Katy Institute for Sustainable Energy, a non-proft organization devoted to stimulating science-based dialog on energy. Dr. Robinson earned BS (Honors) and MA degrees at the University of Missouri at Columbia. He spent a year at the Scripps Institution of Oceanography, before receiving a PhD in Chemistry from the University of California at San Diego. He has authored or co-authored more than 105 publications and presentations, including 2 books and 15 book chapters. He holds 11 patents, primarily on catalysts and process technology. He serves as Public Policy Chair for the Energy and Fuels Division of the American Chemical Society. He is especially proud of his wonderful family and his black belt in TaeKwonDo.