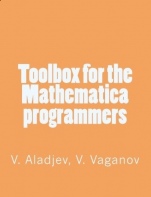 Toolbox for the Mathematica Programmers


Computer mathematics systems (CMS) find more and more broad application in a number of natural, economical and social fields. These systems are rather important tools for scientists, teachers, researchers and engineers, very well combining symbolical methods with advanced computing methods. One of leaders among tools of this class undoubtedly is the Mathematica system. The book focuses on a important aspect - modular programming supported by Mathematica. The given aspect is of particular importance not only for appendices but also above all it is quite important in the creation of the user tools that expand the most frequently used standard tools of the system and/or eliminate its shortcomings, or complement the new facilities.

Software represented in the book contain a number of useful and effective receptions of procedural and functional programming in the Mathematica system that extend the system software and allow sometimes much more efficiently and easily to program the program projects for various purposes first of all wearing system character. The presented tools are of interest not only as independent tools, but also contain a number of the receptions useful in practical programming in the Mathematica software.

The above software rather essentially dilates the Mathematica functionality and can be useful enough for programming of many applications above all of system character. Moreover, the AVZ_Package package containing more 800 tools of various purpose with freeware license is attached to the book.

The given book is oriented on a wide enough circle of the users of computer mathematics systems, researchers, teachers and students of universities for courses of computer science, mathematics, physics and many other natural disciplines. The book will be of interest also to the specialists of the industry and technology that use the CMS in own professional activity.

In the course of preparation of the present book the licensed releases 8 ÷ 10 of the Mathematica system provided by the Wolfram Research Inc. have been used.

Professor Aladjev V.Z. was born on June 14, 1942 in the town Grodno (West Byelorussia). Now, he is the First vice-president of the International Academy of Noosphere (IAN), and academician-secretary of Baltic branch of the IAN whose scientific results have received international recognition, first, in the field of Cellular Automata theory. Aladjev V.Z. is known for the works on computer mathematical systems too. He is full member of a number of the Russian and International Academies. Prof. Dr. Aladjev V.Z. is the author of more than 500 scientific publications, including 90 books and monographs, published in many countries. He participates as a member of the organizing committee and/or a guest lecturer in many international scientific forums in mathematics and cybernetics. In May, 2015 Prof. Aladjev V.Z. was awarded by Gold medal "European Quality" of the European scientific and industrial consortium (ESIC) for works of scientific and applied character.

Dr. Vaganov V.A. was born on February 2, 1946 in Primorye Territory (Russia). Now Vaganov V.A. is the proprietor of the firms Fortex and Sinfex, engaging of problems of delivery of industrial materials to the firms of the Estonian republic. Simultaneously V.A. Vaganov is the executive director of the Baltic branch of the IAN. Vaganov V.A. is known enough for the investigations on automation of economical and statistical works. Result was a series of the scientifical and applied works published in Republican editions and at All-Union conferences. Dr. Vaganov V.A. is the honorary member of the IAN and the author of more than 60 scientific publications, including 12 books.