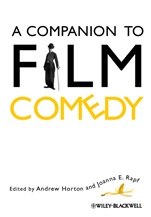 A Companion to Film Comedy


From the very dawn of the era of moving pictures, filmmakers from Hollywood to Hong Kong have been playing it for laughs. Yet despite comedy s levity as a form, the legendary French auteur François Truffaut called it by far the most difficult genre, the one that demands the most work, the most talent, and also the most humility .

This wide–ranging celebration of the variety and complexity of international film comedy covers work from the days of silent movies to the present, and from around the world, including Europe, the Middle East and Asia as well as the United States. These specially commissioned essays map the myriad ways that comic films have reflected and influenced history, culture, politics, and social institutions. As well as engaging with different strands of comedy such as slapstick, romantic, satirical and ironic, the Companion tackles mixed comic genres, individual performers and directors, and broader topics including gender and social–political issues in comedy. Each subject is placed in its formative social, cultural and political context, while the multidisciplinary international contributors ensure a depth and breadth of perspective.

Notes on Editors and Contributors ix

Part I Comedy Before Sound, and the Slapstick Tradition

1 The Mark of the Ridiculous and Silent Celluloid: Some Trends in American and European Film Comedy from 1894 to 1929 15
Frank Scheide

3 Sound Came Along and OutWent the Pies : The American Slapstick Short and the Coming of Sound 61
Rob King

10 The View from the Man Cave: Comedy in the Contemporary Homme–com Cycle 217
Tamar Jeffers McDonald

11 The Reproduction of Mothering: Masculinity, Adoption, and Identity in Flirting with Disaster 236
Lucy Fischer

13 No Escaping the Depression: Utopian Comedy and the Aesthetics of Escapism in Frank Capra s You Can t Take it with You (1938) 273
William Paul

15 Dark Comedy from Dr. Strangelove to the Dude 315
Mark Eaton

16 Black Film Comedy as Vital Edge: A Reassessment of the Genre 343
Catherine A. John

17 Winking Like a One–Eyed Ford: American Indian Film Comedies on the Hilarity of Poverty 365
Joshua B. Nelson

22 Laughter that Encounters a Void? : Humor, Loss, and the Possibility for Politics in Recent Palestinian Cinema 474
Najat Rahman

23 Laughter is Ten Times More Powerful than a Scream: The Case of Animated Comedy 497
Paul Wells

Andrew Horton is the Jeanne H. Smith Professor of Film and Media Studies at the University of Oklahoma, USA. An award–winning screenwriter, he is also the author of twenty books on film, screenwriting and cultural studies, including Screenwriting for a Global Market (2004), Writing the Character–Centered Screenplay (2nd edition, 2000), and The Films of Theo Angelopoulos (2nd edition, 1999). His screenplays include Brad Pitt s first feature film, The Dark Side of the Sun (1988), and the award–winning Something in Between (1983), directed by Srdjan Karanovic. He has led screenwriting workshops around the world as well as across the United States.

Joanna E. Rapf is Professor of English and Film & Media Studies at the University of Oklahoma, USA. She writes regularly about film comedy, with recent essays on Woody Allen, Jerry Lewis, Roscoe Arbuckle, Harry Langdon, and Marie Dressler, and has edited books on a range of subjects including Sidney Lumet, On the Waterfront, and Buster Keaton.

And of course, it very much is. An important subject needs an important companion.  This is it. That s all, folks.   (Reference Reviews, 1 January 2014)

This work is indispensible for any student or scholar who, in the spirit of Rabelais, Swift, and Chesterton, will laugh while studying film images. Summing Up: Highly recommended. Lower–division undergraduates and above; general readers.   (Choice, 1 July 2013)