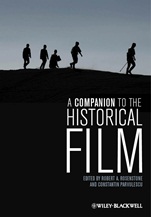 A Companion to the Historical Film


The first comprehensive collection of perspectives in a growing field of research, this essential volume seeks to answer questions that lie at the heart of our response to the genre. How does a narrative history film speak about the past? What does it reveal about the generation creating it? How can we tell its fictions from its truths? Can popular entertainment of this kind also be a serious purveyor of historical knowledge and understanding? Featuring contributions from international scholars in the fields of History, Film Studies, Anthropology, and Cultural and Literary Studies, this collection offers a variety of interdisciplinary approaches. A rich diversity of themes is taken into consideration, ranging from the nature of cinematic truth and the poetics and politics of the history film, to its interplay with written accounts of the past and its place in the classroom. The essays tackle inclusive subjects, such as how the form developed in different political contexts, alongside more focused assessments of individual films and auteurs. Prefaced with an introductory survey of the field by its two distinguished editors, this new Companion is a notable contribution to the field.

Notes on Contributors Introduction Robert A. Rosenstone and Constantin Parvulescu Part 1: History and the Medium of Film 1. Politics and the Historical Film: Hotel Rwanda and the Form of Engagement Alison Landsberg 2. History as Palimpsest: Stanley Kubrick’s Barry Lyndon (1975) Maria Pramaggiore 3. Flagging up History: The Past as a DVD Bonus Feature Debra Ramsay 4. The History Film as a Mode of Historical Thought Robert A. Rosenstone Part 2: Filmmakers as Historians 5. Julia’s Resistant History: Women’s Historical Films in Hollywood and the Legacy of Citizen Kane J. E. Smyth 6. Mark Donskoi’s Gorky Trilogy and the Stalinist Biopic Denise J. Youngblood 7. The Subjects of History: Italian Filmmakers as Historians Marcia Landy 8. Andrzej Wajda as Historian Piotr Witek Part 3: Telling Lives: The Biopic 9. Oliver Stone’s Nixon: The Rise and Fall of a Political Gangster Willem Hesling 10. Authorial Histories: The Historical Film and the Literary Biopic Hila Shachar 11. The Biopic in Hindi Cinema Rachel Dwyer 12. The Lives and Times of the Biopic Dennis Bingham Part 4: Cinema and the Nation 13. Gang Wars: Warner Brothers’ The Roaring Twenties Stars, News, and the New Deal Paula Rabinowitz 14. State Terrorism on Film: Argentine Cinema during the First Years of Democracy (1983–1990) Mario Ranalletti 15. Fossil Frontiers: American Petroleum History on Film Georgiana Banita 16. Sounding the Depths of History: Opera and National Identity in Italian Film Roger Hillman Part 5: Wars and Revolutions 17. Generational Memory and Affect in Letters from Iwo Jima Robert Burgoyne 18. Post–Heroic Revolution: Depicting the 1989 Events in the Romanian Historical Film of the Twenty–First Century Constantin Parvulescu 19. In Country: Narrating the Iraq War in Contemporary US Cinema Guy Westwell Part 6: Premodern Times 20. Heart and Clock: Time and History in The Immortal Heart and Other Films about the Middle Ages Bettina Bildhauer 21. The Anti–Samurai Film Thomas Keirstead Part 7: Slavery and the Postcolonial World 22. The Politics of Cine–Memory: Signifying Slavery in the History Film Michael T. Martin and David C. Wall 23. The African Past on Screen: Moving beyond Dualism Vivian Bickford–Smith 24. Colonial Legacies in Contemporary French Cinema: Jews and Muslims on Screen Catherine Portuges 25. ‘‘What’s Love Got to Do with It?’’: Sympathy, Antipathy, and the Unsettling of Colonial American History in Film Louis Kirk McAuley Index

Robert A. Rosenstone is Professor of History at the California Institute of Technology. His recent scholarship has focused on the overlapping topics of new narrative forms and history’s relationship to the visual media. He has published a dozen books, including Romantic Revolutionary: A Biography of John Reed (1975) , Mirror in the Shrine: American Encounters in Meiji Japan (1988), and King of Odessa: A Novel of Isaac Babel (2005).  His works on film include Visions of the Past: the Challenge of Film to Our Idea of History (1995), Revisioning History: Film and the Construction of a New Past (1995), and History on Film / Film on History (2006, 2nd edition 2012). He created the film section of the American Historical Review and has lectured around the world. Constantin Parvulescu is Senior Lecturer in European and Film Studies at West University of Timisoara, Romania. An emerging voice in the field of film and cultural studies, he has published extensively on issues of film and history and cinematic realism in journals such as Camera Obscura , Jump Cut , Central Europe , and Italian Studies .

“Ultimately, this important collection will prove a useful and accessible resource for researchers and pedagogues both and deserves to be a fixture in the reading lists of students of history as well as film and cultural studies. It would certainly be useful to hear what historians have to say about these analyses and how those in that discipline are coping with the idea that dramatic recreations, fictions and documentaries might be treated seriously for the theses they present on the experience and understanding of the past.”  ( Historical Journal of Film, Radio and Television , 1 March 2014) “Summing Up: Highly recommended. Lower–division undergraduates through faculty.”  ( Choice , 1 August 2013)