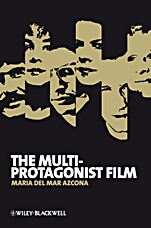 
The Multi–Protagonist Film explores the origins and history of one of the most exciting new developments in contemporary film worldwide. This new genre isn t really new at all; rather, its historical roots run deep in the Hollywood canon think Grand Hotel and re–emerge in contemporary iterations in movies such as Singles,  American Pie, Short Cuts, and Syriana.

This volume provides elegant analyses of a variety of films to help chart the genre s evolution and to explore the complexity, mixed messaging, and signal changes that define the multi–protagonist film in the current age. From the impact of globalization on society to shifting morals and the aftershocks of the sexual revolution, The Multi–Protagonist Film helps us to understand the genre and the imponderables that define the political, cultural, public and private spheres.

1 A Brief History of the Multi–Protagonist Film.

4 Short Cuts and the Consolidation of a Genre.

María del Mar Azcona teaches English and Film Studies at the University of Zaragoza, Spain. She has published articles on film genre, contemporary Hollywood cinema, and Spanish cinema, and is the author of a book on Alejandro González Iñárritu, co–written with Celestino Deleyto (2010).

"Azcona (Univ. of Zaragoza, Spain) has written a lovely little study of films that depart from the typical focalization on a single protagonist and spread their interest over a multitude of characters. . .Recommended. Lower–division undergraduates through faculty." (Choice, 1 October 2011)