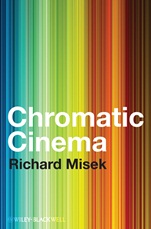 
Color permeates film and its history, but study of its contribution to film has so far been fragmentary. Chromatic Cinema provides the first wide–ranging historical overview of screen color, exploring the changing uses and meanings of color in moving images, from hand painting in early skirt dance films to current trends in digital color manipulation.

In this richly illustrated study, Richard Misek offers both a history and a theory of screen color. He argues that cinematic color emerged from, defined itself in response to, and has evolved in symbiosis with black and white. Exploring the technological, cultural, economic, and artistic factors that have defined this evolving symbiosis, Misek provides an in–depth yet accessible account of color′s spread through, and ultimate effacement of, black–and–white cinema.

Crossing the Chromatic Wall in Wings of Desire.

Richard Misek is a film–maker and Lecturer in Screen Studies at the University of Bristol, UK. He has been published widely in film journals, and his short films have been shown at festivals including Cannes, Raindance, and Clermont–Ferrand, and broadcast on BBC2 and Channel 4.

Chromatic Cinema provides a much–needed technological history of machines and techniques for producing moving images in color, as well as a cultural history of color films.   (BRIAN R. JACOBSON, Technology and Culture, July 2012)

An invigorating critical intervention into the history, theory and aesthetic analysis of colour in the cinema.  (JENNIFER M. BARKER, Screen, August 2012)

Chromatic Cinema provides a wealth of information and of examples of different approaches to colour in cinema and stimulates enough thoughts and reflections to be a worthy addition to any library on colour in cinema.   (NICOLA MAZZANTI, Historical Journal of Film, Radio and Television, April 2012

"Chromatic Cinema is an excellent critical history of screen colour by Richard Misek, who teaches at the University of Bristol, near which, as I recall, is a plaque to mark the birthplace of William Friese–Greene, the somewhat unfortunate British movie pioneer, one of who patents was for his own colour system." (Times Literary Supplement, 25 November 2011)

"The book touches on most of the important aspects of color cinema–from history to technology to ideology–and serves as an orientation course for a complex subject. It′s a gateway read, neither intimidating nor frustrating. For a beginner (like me), it presented a smattering of philosophical ideas, a grounding in the why and how progression of color use, and a primer on the science of color technologies." (MUBI, September 2010)