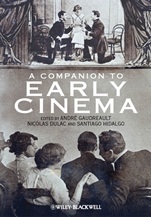 A Companion to Early Cinema


A Companion to Early Cinema is an authoritative reference on the field of early cinema. Its 30 peer–reviewed chapters offer cutting–edge research and original perspectives on the major concerns in early cinema studies, and take an ambitious look at ideas and themes that will lead discussions about early cinema into the future. Including work by both established and up–and–coming scholars in early cinema, film theory, and film history, this will be the definitive volume on early cinema history for years to come and a must–have reference for all those working in the field.

"This book is an authoritative reference on the field of early cinema.It includes work by established and up–and–coming scholars that offers the cutting–edge research and original perspectives. Its 30 chapters are a must–have reference for those working in field." ( Wonderpedia , 19 September 2013) "It goes without saying that it deserves to be on the library shelves of institutions where the subject forms part of the academic curriculum."  ( Reference Reviews , 1 June 2013) "One of the strengths of this substantial ′companion′ is that it raises the issue of definition in a variety of provocative ways."  ( Sight & Sound , 1 February 2013)