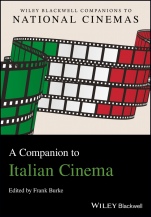 A Companion to Italian Cinema


"If you want to get up to speed on the latest and most significant research on Italian cinema, this is the place to start. The Companion provides overviews that orient the general reader and a rich mix of focused studies for the specialist. It revisits familiar themes (neo–realism, national character, great directors) with refreshing new readings, but broadens the cultural context with the inclusion of work on genres, stars, and audiences that subvert critical hierarchies. The writing engages with current theoretical debates without jargon. Analyses of overlooked phenomena such as dubbing, the role of the Catholic Church, and art/experimental film open up unusual perspectives. A sharp editorial intelligence brings coherence to a multi–faceted volume rich in insight and information."

Written by leading figures in the field and embracing the significant films, filmmakers, and historical moments of Italian cinema, A Companion to Italian Cinema re–maps the genre′s rich history, capturing its celebrated intellectual and aesthetic verve and delineating its socio–political and formal contours from its origins to the early years of the 21st Century.

Including essays from both established and more recent scholars, the Companion considers traditional areas of research such as neorealism, auteur cinema, commedia all′italiana, Italian silent cinema, politics, Catholicism, and terrorism. A significant section of the volume is also dedicated to more recent issues such as feminism, queer cinema, immigration, and digitalization. This volume addresses major films in the history of Italian cinema, from Cabiria (1914) to La grande bellezza (2013), and major directors such as Rossellini, Fellini, Antonioni, and Bertolucci. The role of music and issues of distribution and reception are also considered, and a comprehensive overview of the history of Italian cinema studies is provided. The result is a comprehensive, cutting–edge collection that will become a standard resource for academic and non–academic purposes alike.

Preface and In Memoriam

5. Genre, Politics, and the Fascist Subject in the Cinema of Italy
Marcia Landy

6. Staying Alive: The Italian Film Industry from the Postwar to Today
Barbara Corsi

7. Italian Cinema and Catholicism: From Vigilanti cura to Vatican II and Beyond
Marco Vanelli

8. The Italian Neorealist Experience: The Orphan–Child and New Ways of Looking at the World
Lorenzo Borgotallo

FILM COMEDY THE 1950S AND BEYOND

12. The Question of Italian National Character and the Limits of Commedia all italiana
Alberto Sordi, Federico Fellini, Carlo Lizzani and Stephen Gundle

FRENCH–ITALIAN FILM COLLABORATIONS INTO THE 1960S

13. Cross–fertilization between France and Italy from Neorealism through the 1960′s
Adriano Aprà

16. The Representation of Terrorism in Italian Cinema
Christian Uva

ITALIAN CINEMA FROM THE 1970S TO THE PRESENT

17. From Cinecittà To the Small Screen: Italian Cinema After the Mid–1970s Crisis
Tiziana Ferrero–Regis

21. Notes on the History of Italian Nonfiction Film
Luca Caminati and Mauro Sassi

22. A Century of Music in Italian Cinema
Emanuele D Onofrio

23. The Soundtrack in Italian Cinema, A Schizophonic Take
Antonella Sisto

25. Women in Italian Cinema: From the Age of Silent Cinema to the Third Millennium
Bernadette Luciano and Susanna Scarparo

30. The Screen in the Mirror: Thematic and Textual Reflexivity in Italian Cinema
Stefania Parigi

Frank Burke is Professor Emeritus of Film at Queen′s University, Canada. He is the author of Fellini′s Films: From Postwar to Postmodern (1996) and Federico Fellini: Variety Lights to Dolce Vita (1984) and has co–edited Federico Fellini: Contemporary Perspectives (with Marguerite R. Waller, 2002). He has produced over 100 publications, keynote addresses, invited lectures, and special sessions on Italian and North American cinema, and has edited for the Canadian Journal of Political and Social Theory and Literature/Film Quarterly.