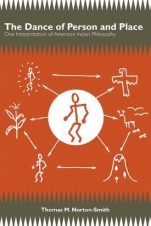 The Dance of Person and Place: One Interpretation of American Indian Philosophy


Ever since first contact with Europeans, American Indian stories about how the world is have been regarded as interesting objects of study, but also as childish and savage, philosophically curious and ethically monstrous. Using the writings of early ethnographers and cultural anthropologists, early narratives told or written by Indians, and scholarly work by contemporary Native writers and philosophers, Shawnee philosopher Thomas Norton-Smith develops a rational reconstruction of American Indian philosophy as a dance of person and place. He views Native philosophy through the lens of a culturally sophisticated constructivism grounded in the work of contemporary American analytic philosopher Nelson Goodman, in which stories (or "world versions") satisfying certain criteria construct actual worlds--words make worlds. Ultimately, Norton-Smith argues that the Native stories construct real worlds as robustly as their Western counterparts, and, in so doing, he helps to bridge the chasm between Western and American Indian philosophical traditions.