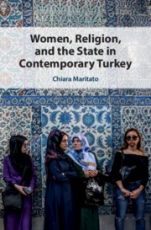 Women, Religion, and the State in Contemporary Turkey


Tracing the centrality of women in the definition of Turkish secularism, this study investigates the 2003 decision to increase the number of women officers employed by the Presidency of Religious Affairs (Diyanet). It explores how, as professional religious officers, the female Diyanet preachers epitomize a pious, modern and highly educated woman whose role in society has been raised to prominence. Based on extensive fieldwork in Turkey, and drawing on a rich ethnography of the activities conducted by Diyanet women preachers in Istanbul, Chiara Maritato disentangles the states attempt to standardize a multifaceted female religious participation. In using the feminization of the Diyanet as a prism through which to understand the significance of a renewed presence of Islam in the Turkish public realm, she casts light on a broader reformulation of religious services for women and families in Turkey, and pinpoints how this pervasive moral support has been able to penetrate and reshape even secular spaces.