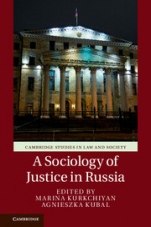 A Sociology of Justice in Russia


Much of the media coverage and academic literature on Russia suggests that the justice system is unreliable, ineffective and corrupt. But what if we look beyond the stereotypes and preconceptions? This volume features contributions from a number of scholars who studied Russia empirically and in-depth, through extensive field research, observations in courts, and interviews with judges and other legal professionals as well as lay actors. A number of tensions in the everyday experiences of justice in Russia are identified and the concept of the administerial model of justice is introduced to illuminate some of the less obvious layers of Russian legal tradition including: file-driven procedure, extreme legal formalism combined with informality of the pre-trial proceedings, followed by ritualistic format of the trial. The underlying argument is that Russian justice is a much more complex system than is commonly supposed, and that it both requires and deserves a more nuanced understanding.