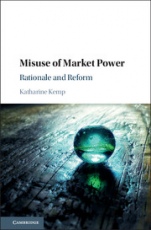 Laws prohibiting unilateral anticompetitive conduct have been the subject of vigorous international debate for decades, as policymakers, antitrust scholars and agencies continue to disagree over how best to regulate the market conduct of a single firm with substantial market power. Katharine Kemp describes the controversy over Australias misuse of market power laws in recent years, which mirrored the international debate in this sphere, and culminated in the fundamental reform of the misuse of market power prohibition under the Competition and Consumer Act 2010 (Cth) in 2017. Misuse of Market Power: Rationale and Reform explains Australias new misuse of market power law, which adopts an effects-based test for unilateral conduct, and makes a comparative analysis between Australian tests for unilateral anticompetitive conduct and tests from the US and the EU. This text also illuminates the frequently mentioned, but little understood, concept of purpose and its role in framing unilateral conduct standards.