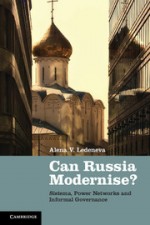 
In this original, bottom-up account of the evolution of contemporary Russia, Alena Ledeneva seeks to reveal how informal power operates. Concentrating on Vladimir Putins system of governance - referred to as sistema - she identifies four key types of networks: his inner circle, useful friends, core contacts and more diffuse ties and connections. These networks serve sistema but also serve themselves. Reliance on networks enables leaders to mobilise and to control, yet they also lock politicians, bureaucrats and businessmen into informal deals, mediated interests and personalised loyalty. This is the modernisation trap of informality: one cannot use the potential of informal networks without triggering their negative long-term consequences for institutional development. Ledenevas perspective on informal power is based on in-depth interviews with sistema insiders and enhanced by evidence of its workings brought to light in court cases, enabling her to draw broad conclusions about the prospects for Russias political institutions.