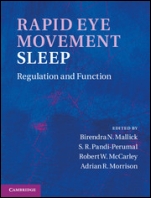 
Spanning over half a century of investigation into Rapid Eye Movement (REM) sleep, this volume provides comprehensive coverage of a broad range of topics in REM sleep biology. World renowned researchers and experts are brought together to discuss past and current research and to set the foundation for future developments. Key topics are covered in six sections from fundamental topics (historical context and general biology) to cutting-edge research on neuronal regulation, neuroanatomy and neurochemistry, functional significance and disturbance in the REM sleep generating mechanism. A reference source for all aspects of REM sleep research, it also incorporates chapters on neural modelling, findings from non-human species and interactions between brain regions. This is an invaluable resource, essential reading for all involved in sleep research and clinical practice.