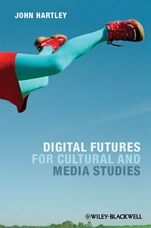 
In his new work, Digital Futures for Cultural and MediaStudies, a pioneer in the field turns his eye to the digitalfuture, and how its transformation will also transform how it isstudied.

This thought–provoking analysis sets out to reorient and rethinkmedia and cultural studies, to grapple with the mutual productivitythat the digital future will continue to facilitate, whileinvestigating some examples to see which way they are pointing,including popular journalism, the public domain, media citizenship,messaging, and the role of creative destruction inthe renewal of complex systems.

The tools may change, Hartley argues, but media and popularculture will always engage with questions of meaning, identity,power, humankind in the context of technology, and globalinteraction among our dispersed and diverse species.

1. The History and Future of Ideas 1

4. The Distribution of Public Thought 94

John Hartley is Research Director of the Centre for Creative Industries & Innovation at Queensland University of Technology, Australia, where he was founding dean of the Creative Industries Faculty. Previously he was head of the School of Journalism, Media & Cultural Studies at Cardiff University in Wales. Hartley is author of many books on popular culture, media, journalism and creative industries. His previous books with Wiley–Blackwell include Television Truths (2008), Story Circle: Digital Storytelling Around the World (co–edited with Kelly McWilliam, 2009), and Creative Industries (2005).