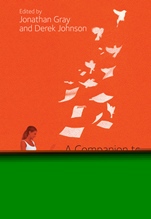 A Companion to Media Authorship


While the idea of authorship has transcended the literary to play a meaningful role in the cultures of film, television, games, comics, and other emerging digital forms, our understanding of it is still too often limited to assumptions about solitary geniuses and individual creative expression. A Companion to Media Authorship is a ground–breaking collection that re–frames media authorship as a question of culture in which authorship is as much a construction tied to authority and power as it is a constructive and creative force of its own.  Gathering together the insights of leading media scholars and practitioners, 28 original chapters map the field of authorship in a cutting–edge, multi–perspectival, and truly authoritative manner. The contributors develop new and innovative ways of thinking about the practices, attributions, and meanings of authorship.  They situate and examine authorship within collaborative models of industrial production, socially networked media platforms, globally diverse traditions of creativity, complex consumption practices, and a host of institutional and social contexts.  Together, the essays provide the definitive study on the subject by demonstrating that authorship is a field in which media culture can be transformed revitalized, and reimagined.

“All in all, an engaging examination of the multiple dimensions of authorship in the 21 st century.  Summing Up: Recommended.  Upper–division undergraduates and above.”  ( Choice , 1 December 2013)