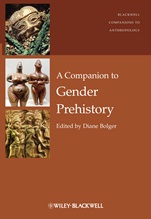 A Companion to Gender Prehistory

The concept of fundamental, innate differences between males and females is a relatively recent phenomenon, the product of western Enlightenment thinking; yet the uncritical acceptance of sex and gender as natural and unchanging phenomena continues to shape much of the research in prehistoric archaeology today. A Companion to Gender Prehistory aims to correct this view by understanding gender as a complex social category, and charting its variability through time and space. In this wide–ranging overview of the field, organized thematically and geographically, top scholars offer up–to–date and comprehensive coverage of developments in the field over the past 30 years, challenging a number of false assumptions about sex and gender, and demonstrating how top–down thinking can skew interpretations of the past. Thematic chapters (Part I) address current areas of interest and debate in gender prehistory, including the interfaces between gender and human evolution, social complexity, prehistoric material culture, bodies and identities, human imagery, and sexuality. Regional chapters (Part II) offer gendered perspectives on archaeological research in particular areas of Africa, Asia, Europe, the Americas, and the South Pacific, and highlight key areas for future research. With its critical wide–ranging approach to prehistoric archaeology examined through the lenses of gender and feminism, this Companion will serve as an authoritative guide to gender prehistory for researchers, instructors, and students in anthropology, archaeology, and gender studies.

Diane Bolger is a Research Fellow in Archaeology at the University of Edinburgh in Scotland. In addition to her research on gender, she specializes in the ceramics of early agricultural societies in the ancient Near East, particularly in Cyprus, where she has been involved in fieldwork since the early 1980s. Her major publications on gender include three books: Gender in Ancient Cyprus (2003), Engendering Aphrodite: Women and Society in Ancient Cyprus (2002), and Gender through Time in the Ancient Near East (2008).

“Part 2′s strength is its global breadth, with most contributors offering a synthesized and regionally bounded historiography of gender studies. Summing Up: Recommended. Upper–division undergraduates and above.”  ( Choice, 1 July 2013)