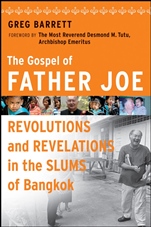 The Gospel of Father Joe: Revolutions and Revelations in the Slums of Bangkok

The Incredible Story of Father Joe "The story of Father Joe and the Bangkok squatter land he calls holy is a critical chapter in the modern–day memoirs of humankind. His Mercy Centre is more than a refuge and grassroots education system for children caught in the bramble of our new prosperity; it′s the vivid expression of God′s will for how we are to treat family. In effect, it′s the Bible for how best to lift families from the poverty that kills millions of children every year: You plow the ground with textbooks and local muscle. . . ." "I maintain great confidence in humanity. I see the Divine in its grand swells of compassion. I bear witness to its manifestation after aberrant hurricanes and tsunamis rip life and limb from the U.S. Gulf Coast to South Asia. I am encouraged by the grassroots activism that today draws millions of volunteers to the cause of global poverty. And I am delightfully inspired by the kindred spirits that endure the rubble of squatter land that Father Joe knows to be holy." From the Foreword by the Most Reverend Desmond M. Tutu, Archbishop Emeritus "For more than thirty–five years Father Joe has been an inspiration for the poor, the downtrodden, and the forgotten among the worst slums of Bangkok. There is no greater compliment in this earthly life than to say that one dedicated human being became a voice for those who have no voice, and created a haven for those who had no home." United States Senator Jim Webb, Virginia

Greg Barrett is a twenty–year veteran of local, national, and foreign reporting for wire and newspapers in Georgia, the Carolinas, Hawaii, and Maryland. He was a roving correspondent based in the Washington, D.C., bureau for Gannett News Service/USA Today when he met Father Joe Maier, and most recently he worked as a state correspondent for the Baltimore Sun. He lives in Northern Virginia with his wife and two sons.

"While he stops short of calling Maier the Christ figure who works the water–to–wine miracle, Barrett makes it clear that Maier comes awfully close." – The Christian Century (Oct 21, 2008) "Barrett, a veteran journalist, records the inspiring work of Catholic priest Joe Maier in Bangkok′s slums. Drawn to service in Thailand on a whim, the misfit American seminary student found a calling among the Thai downtrodden, even living in the slums himself. . . . many of the stories are memorable, from the tragic (street toddlers, happily schooled at Mercy, later dying there of HIV/AIDS), to the triumphant (Mercy graduates who attend college abroad and are able to climb out of poverty)."––from Publisher Weekly′s Religion Bookline "Based on his own meetings with Father Joe, his keen observer′s eye, and on numerous early–morning interviews in Bangkok′s Lumpini Park, where the priest engages in his daily run, Barrett tells his story sometimes with the objectivity of the experienced journalist he is, but also often as a poet, deeply stirred by the poignant contrasts between the deprivation of the slum–dwellers and the material excesses of the contemporary developed world in which he and his family live."––from Huffingtonpost.com "The book is partly a story of the two men′s friendship, part biography and part a detailing of Father Joe′s beliefs about life and the world. It is boosted along by Barrett′s writing, which is clear, thoughtful and pleasingly devoid of cliches. Barrett presents a well–rounded picture of Father Joe — compassionate, ornery and, in the opinion of some colleagues, an eccentric." –– from Gannett News Service "Barrett writes beautifully about the connection Father Joe has with the small children, the older ‘street kids’ and those suffering with HIV and AIDS. They are not statistics but children with names who need to be loved… His positive, ever forward–looking approach is what these children need to survive and to advance in life." – from The Catholic Review "…Barrett’s depiction of the slums and of the heroic effort and love of this priest inspires the best of humanity against the backdrop of the worst of the human condition." –– from The Mirror Online’s Book Nook