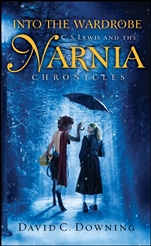 Into the Wardrobe: C. S. Lewis and the Narnia Chronicles

Praise for Into the Wardrobe "Into the Wardrobe will be best enjoyed by fans who have read the entire series, but those who haven′t may be so impressed by Downing′s exploration of Lewis′s deep and sophisticated imagination that they will sneak ′into the wardrobe′ and devour the Chronicles for themselves." Publishers Weekly "With lucidity and uncommon good sense, David Downing offers a guide to the Narnia Chronicles that will deepen the reader′s appreciation of these perennial favorites while illuminating the origins of Narnia in Lewis′s life and work." John Wilson, editor, Books & Culture "Everyone who has enjoyed the Chronicles of Narnia and anyone who is interested in the writings of C.S. Lewis must read this excellent work . . . . Downing helps the reader understand how the Chronicles reflect not only Lewis′s towering intellect but also his strong faith and his sensitive heart." Armand Nicholi, M.D., author, The Question of God: C. S. Lewis and Sigmund Freud Debate God, Love, Sex, and the Meaning of Life "Like his previous studies of Lewis′s life and writings, Into the Wardrobe proves again that Downing is a master at weaving essential facts and fresh insights into a smooth narrative . . . . A balanced and satisfying guide for either experienced or first–time readers of Narnia." Robert Trexler, editor, CSL: The Bulletin of the New York C. S. Lewis Society

introduction: The Child as Father of the Man. 1 The Life of C. S. Lewis. 2 The Genesis of Narnia. 3 The Spiritual Vision of the Narnia Chronicles. 4 Moral Psychology. 5 Classical and Medieval Elements. 6 What’s in a Narnian Name? 7 Lewis’s Literary Artistry. appendix: Definitions, Allusions, and Textual Notes. notes. bibliography. acknowledgments. the author. index.

David C. Downing is a leading C. S. Lewis expert, award–winning author, and professor of English at Elizabethtown College in Lancaster County, Pennsylvania. His articles about Lewis have appeared in such publications as Christianity Today, Christianity and Literature, Books & Culture, Christian Scholars Review, and numerous other journals. His books include Planets in Peril, about the Space Trilogy; The Most Reluctant Convert, a biography of Lewis that was named one of the Top Ten Religion Books of the Year by the American Library Association; and Into the Region of Awe, a study of the mystical elements in Lewis′s life and writings.