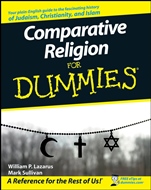 Understand the beliefs, customs, and rituals of each faith

Want to know more about the faiths of Judaism, Christianity, and Islam? This plain–English guide traces their evolution from their commonorigin Abraham and explains their different, yet linked, beliefs.You′ll see how each religion developed, endured setbacks, and became a fixture in modern society and you′ll learn how members havedeveloped similar approaches to worship.

How the belief in one God originated

The roots of Abraham′s family tree

The sacred texts of each faith

How these religions influenced the world

Part I: History Is a Happening Thing.

Part II: The Development of Judaism, Christianity, and Islam.

Chapter 4: Judaism Finds God in Everything.

Chapter 5: Jesus and the Origins of Christianity.

Chapter 7: The Birth of Islam: The Prophet Submits to Allah.

Chapter 8: Islam: Submission of the Faithful.

Chapter 17: Hell in a Nutshell.

Chapter 18: War and Peace: Why Can t We All Get Along?

Part V: The Part of Tens.

Appendix A: Timelines for Religions.

A native of Maine who grew up in northeast Ohio, William Paul Lazarus began studying religious history as a child and has never stopped. By age 13, he was teaching Sunday school. After moving to Florida in 1986, he branched out by teaching at various institutions, including Daytona Beach Community College and Stetson University. A professional writer and high school English teacher, he regularly speaks at churches and synagogues around Florida, and had a successful radio show on 1340–AM, WROD, in Daytona Beach. This is his ninth book on various aspects of religious history. He and his wife live in Daytona Beach, Florida.

Mark Sullivan was born in Greenwich Village, Manhattan, and grew up in a traveling, academic family, something like a fantastic traveling circus. He returned to NYC for college, at Columbia University, where he studied Comparative Literature and European Languages. He later attended the Juilliard School of Music for studies in composition.