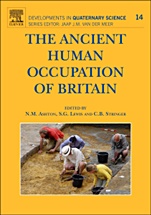 The Ancient Human Occupation of Britain

The Ancient Human Occupation of Britain Project (AHOB) funded by the Leverhulme Trust began in 2001 and brought together researchers from a range of disciplines with the aim of investigating the record of human presence in Britain from the earliest occupation until the end of the last Ice Age, about 12,000 years ago. Study of changes in climate, landscape and biota over the last million years provides the environmental backdrop to understanding human presence and absence together with the development of new technologies. This book brings together the multidisciplinary work of the project. The chapters present the results of new fieldwork and research on old sites from museum collections using an array of new analytical techniques.

Features an up-to-date treatment of the record of human presence in the British Isles during the Palaeolithic period (700,000 - 10,000 years before present)Takes multidisciplinary approach that includes archaeology, geochemistry, geochronology, stratigraphy and sedimentologyCoincides with the culmination of the AHOB project in 2010, providing a benchmark statement on the record of human occupation in Britain that can be utilized and tested by future research

1. The changing landscapes of the earliest human occupation of Britain and Europe (C. Stringer). 2. Climates of the early Middle Pleistocene in Britain: Environments of the earliest humans in northern Europe (I. Candy, J. Lee, and B. Silva). 3. Palaeoenvironments of Human occupation: The stable isotopic record of terrestrial carbonates (I. Candy, M. Stephens, J. Hancock, R. Waghorn). 4. Mapping the human record: Population change in Britain during the later Middle Pleistocene (N. Ashton, S. Lewis, and R. Hosfield). 5. The Emergence, Diversity and Significance of the Mode 3 (Prepared Core) Technologies (M. White, N. Ashton, and B. Scott). 6. Technology and landuse in the early Middle Palaeolithic of the Thames valley (B. Scott, N. Ashton, S. Lewis, S. Parfitt, and M. White). 7. The Early Middle Palaeolithic: the European Context (B. Scott, and N. Ashton). 8. Continuities and discontinuities in Neandertal presence – a closer look at northwestern Europe (W. Roebroeks, J.-J. Hublin, and K. MacDonald). 9. Testing human absence: The British record of MIS 7 and 5e (S. Lewis, N. Ashton, and R. Jacobi). 10. The Mammal Faunas of the British Late Pleistocene (A. Currant, and R. Jacobi). 11. Radiocarbon dating and understanding the human record during the EUP (R. Jacobi, and T. Higham). 12. The Later Upper Palaeolithic re-colonization of Britain: New results from AMS radiocarbon dating (R. Jacobi, and T. Higham). 13. New results from the examination of cut-marks using 3D imaging (S. Bello). 14. The use of pollen from hyaena coprolites for the reconstruction of past vegetation (M. Lewis). 15. Analysis of faunal and environmental changes in the British Palaeolithic (P.D. Polly, and J.T. Eronen)