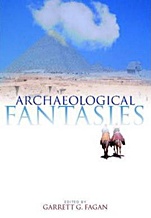 This edited volume examines the phenomenon of pseudoarchaeology from a variety of perspectives. The engaging and stimulating essays, written by a diverse group of scholars, scientists and writers, explore issues including: the differences between real and pseudoarchaeology pseudoarchaeology's increasing popularity and how the media, especially TV, has contributed to this the warping of genuine archaeology to fit national and other agendas pseudoarchaeology's potential risk to the genuine academic field of archaeology. Including case studies such as the supposedly mystical Maya, Nazi pseudoarchaeology, ancient pseudohistory in modern India, and surveys of esoteric Egypt, this fascinating text will appeal to students of archaeology and ancient history as well as being of interest to the general reader.

Part 1: The Phenomenon. Introduction: An Epistemology of Archaeology 1. Diagnosing Pseudoarchaeology 2. The Attraction of Non-Rational Archaeological Hypotheses: The Individual and Sociological Factors 3. Sceptics, Fence-Sitters, and True Believers: Student Acceptance of an Improbable Prehistory 4. Memoirs of a True Believer Part 2: Five Case Studies 5. Esoteric Egypt 6. The Mystique of the Ancient Maya 7. Pseudoarchaeology and Nationalism: Essentializing Difference 8. Archaeology and the Politics of Origins: The Search for Pyramids in Greece 9. Rama's Realm: Indocentric Rewritings of Early South Asian Archaeology and History Part 3: Pseudoarchaeology in its Wider Context 10. The Atlantean Box 11. The Colonization of the Past and the Pedagogy of the Future 12. Pseudoscience and Post-Modernism: Antagonists or Fellow-Travellers? 13. Concluding Observations