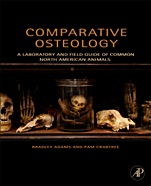 Comparative Osteology is a photographic atlas of common North American animal bones designed for use as a laboratory and field guide by the forensic scientist or archaeologist. The intent of the guide is not to be inclusive of all animals, but rather to present some of the most common species which also have the highest likelihood of being potentially confused with human remains.

An affordably priced, compact laboratory/field manual, comparing human and nonhuman bonesContains almost 600 high-quality black and white images and diagrams, including inch and centimeter scales with each photographWritten by the foremost forensic scientists with decades of experience in the laboratory and as expert witnessesAn additional Companion Web site hosts images from the volume the reader can magnify and zoom into to see specific landmarks and features on bones http://booksite.academicpress.com/9780123884374