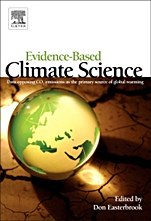 
Global warming and human-induced climate change are perhaps the most important scientific issues of our time. These issues continue to be debated in the scientific community and in the media without true consensus about the role of greenhouse gas emissions as a contributing factor.

Evidence-Based Climate Science: Data opposing CO2 emissions as the primary source of global warming objectively gathers and analyzes scientific data concerning patterns of past climate changes, influences of changes in ocean temperatures, the effect of solar variation on global climate, and the effect of CO2 on global climate to clearly and objectively present counter-global-warming evidence not embraced by proponents of CO2.

An unbiased, evidence-based analysis of the scientific data concerning climate change and global warmingAuthored by 8 of the world’s leading climate scientists, each with more than 25 years of experience in the fieldExtensive analysis of the physics of CO2 as a greenhouse gas and its role in global warmingComprehensive citations, references, and bibliographyAdaptation strategies are presented as alternative reactions to greenhouse gas emission reductions