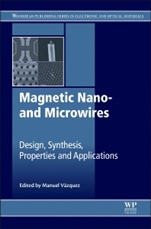 Magnetic nanowires and microwires are key tools in the development of enhanced devices for information technology (memory and data processing) and sensing. Offering the combined characteristics of high density, high speed, and non-volatility, they facilitate reliable control of the motion of magnetic domain walls; a key requirement for the development of novel classes of logic and storage devices.

Part One introduces the design and synthesis of magnetic nanowires and microwires, reviewing the growth and processing of nanowires and nanowire heterostructures using such methods as sol-gel and electrodeposition combinations, focused-electron/ion-beam-induced deposition, chemical vapour transport, quenching and drawing and magnetic interactions. Magnetic and transport properties, alongside domain walls, in nano- and microwires are then explored in Part Two, before Part Three goes on to explore a wide range of applications for magnetic nano- and microwire devices, including memory, microwave and electrochemical applications, in addition to thermal spin polarization and configuration, magnetocalorific effects and Bloch point dynamics.