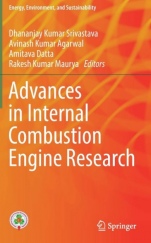 This book discusses all aspects of advanced engine technologies, and describes the role of alternative fuels and solution-based modeling studies in meeting the increasingly higher standards of the automotive industry. By promoting research into more efficient and environment-friendly combustion technologies, it helps enable researchers to develop higher-power engines with lower fuel consumption, emissions, and noise levels. Over the course of 12 chapters, it covers research in areas such as homogeneous charge compression ignition (HCCI) combustion and control strategies, the use of alternative fuels and additives in combination with new combustion technology and novel approaches to recover the pumping loss in the spark ignition engine. The book will serve as a valuable resource for academic researchers and professional automotive engineers alike.

Author Biography: Dr. Dhananjay Kumar Srivastava has been an assistant professor of Mechanical Engineering at the Indian Institute of Technology Kharagpur since April 2015. He did his Ph.D. at the Engine Research Laboratory of IIT Kanpur in 2013, and was subsequently a research fellow at the University of Birmingham, UK. His areas of expertise include laser ignition for engines, combustion visualization, emission control, engine calibration, and gasoline direct injection. Dr. Srivastava received the Gandhian Young Technological Innovation Award in March 2013 and a Pool Scientist fellowship from the CSIR, India from 2010 to 2013. Prof. Avinash K. Agarwal joined the IIT Kanpur in 2001. His areas of interest are IC engines, combustion, alternative fuels, conventional fuels, optical diagnostics, laser ignition, HCCI, emission and particulate control, and large-bore engines. He has published over 230 international journal and conference papers. Prof. Agarwal is a fellow of the SAE (2012), ASME (2013), ISEES (2015) and INAE (2015). He has received several awards such as the prestigious Shanti Swarup Bhatnagar Award in Engineering Sciences in 2016; Rajib Goyal Prize in 2015; NASI-Reliance Industries Platinum Jubilee Award in 2012; and the INAE Silver Jubilee Young Engineer Award-2012. Dr. Amitava Datta is a professor at Jadavpur University's Department of Power Engineering. He received his degree in Mechanical Engineering from Jadavpur University and his PhD from IIT Kharagpur. Dr. Datta was the recipient of an Alexander von Humboldt Fellowship in the year 2000 and worked at the Lehrstuhl fur Technische Thermodynamik at the University of Erlangen Nuremberg. His research interests include combustion, atomization, energy, thermodynamic modeling and application of computational fluid dynamics (CFD) in reacting flows, microfluidics and biological flows. He has published 83 peer-reviewed research papers in various international journals and at conferences. Dr. Rakesh Kumar Maurya has worked at the Department of Mechanical Engineering, Indian Institute of Technology Ropar since August 2013. Before joining IIT Ropar, he worked as a CSIR Pool Scientist. He received his bachelor's, master's and PhD degrees, all in Mechanical Engineering from the Indian Institute of Technology Kanpur. He is a recipient of Young Scientist Award (2016) from the International Society for Energy, Environment and Sustainability. His areas of interest are low-temperature engine combustion, alternative fuels, engine combustion diagnostics, engine instrumentation, combustion and emission control, particulate matter characterization, engine management systems, and philosophy of science.