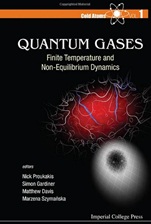 Both graduate students and established researchers wishing to understand the state of the art will greatly benefit from this comprehensive and up-to-date review of non-equilibrium and finite temperature techniques in the exciting and expanding field of quantum gases and liquids.

Readership: Aimed at graduate level students and for researchers.