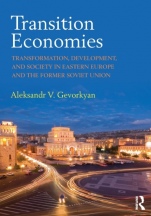 Transition Economies: Transformation, Development, and Society in Eastern Europe and the Former Sovi

This interdisciplinary study offers a comprehensive analysis of the transition economies of Central and Eastern Europe and the former Soviet Union. Providing full historical context and drawing on a wide range of literature, this book explores the continuous economic and social transformation of the post-socialist world. While the future is yet to be determined, understanding the present phase of transformation is critical. The book's core exploration evolves along three pivots of competitive economic structure, institutional change, and social welfare. The main elements include analysis of the emergence of the socialist economic model; its adaptations through the twentieth century; discussion of the 1990s market transition reforms; post-2008 crisis development; and the social and economic diversity in the region today. With an appreciation for country specifics, the book also considers the urgent problems of social policy, poverty, income inequality, and labor migration. Transition Economies will aid students, researchers and policy makers working on the problems of comparative economics, economic development, economic history, economic systems transition, international political economy, as well as specialists in post-Soviet and Central and Eastern European regional studies.

Review: "A new book on transition economies, with a strong historical perspective, knowledge of the area and languages, lots of empirics and discussion of new issues like migration and remittances." - Branko Milanovic, Visiting Presidential Professor, Graduate Center - CUNY; Former Lead Economist, World Bank Research Department. `This comprehensive analysis of transition processes is a welcome addition to the transition literature. It is rich in historical analysis and presents a sobering and factually rich presentation of the diverse evolutions in Central and Eastern Europe. A must-read for all those interested in transition and countries of the region.' - Gerard Roland, E. Morris Cox Professor of Economics, University of California, Berkeley, USA `Professor Gevorkyan's book is a must-read for those interested in the cataclysmic changes that occurred in Eastern Europe and the Former Soviet Union, and that are still playing out towards as yet unknown destinations. The author has produced a thorough and insightful, yet questioning, account of the transition economies of that vast region and diverse collection of countries. As an economist, he has analyzed that aspect well and thoroughly, but has gone far beyond that rather simplistic view of economic transition to analyze the far more complex topic of broad societal transformation. He has done so with attention to the historical, social, political and institutional changes that occurred during and as result of the transition. Another important contribution is the author's insistence on viewing the transition and transformation of the individual countries involved, as he has done in his analyses, rather than considering the region as a single entity as might have been implied from the book's title. Professor Gevorkyan has provided a highly analytical and nuanced view of an enormously important topic, but with a framework and writing style that produce a comfortable, as well as valuable, reading experience.' - Daniel J. McCarthy, Emeritus University Distinguished Professor and McKim-D'Amore Distinguished Professor of Global Management & Innovation, D'Amore-McKim School of Business, Northeastern University, USA `In his enlightening book, Aleksandr V. Gevorkyan systematically unpacks the nuanced complexities of economic history and social dynamics of the post-socialist Eastern Europe and former Soviet Union. This creatively novel exploration will be an interesting and engaging must-read!' - Otaviano Canuto, World Bank Group, Executive Director for Brazil, Colombia, Dominican Republic, Ecuador, Haiti, Panama, Philippines, Suriname and Trinidad & Tobago 'This excellent book is an important tool for graduate students, scholars and policy makers.' - Andrea Bernardi, Senior Lecturer in Employment and Organization Studies at Oxford Brookes University in the UK

1. The great unknowns - post-socialist economies and societies in motion 2. Transition vs. transformation: what is clear and not so clear about transition economics 3. The economic and social context at the turn of the twentieth century: from the Russian Empire to the Soviet Union 4. The war economy and the post World War II reconstruction in the USSR 5. From war to wall to common market: the dialectics of the Eastern European socialist economy 6. The socialist economic model, market socialism, stagnation, perestroika, and the end of plan 7. Free market reform: liberalization, privatization, shock therapy, and policy misfortunes 8. Poverty, income inequality, labor migration, and diaspora potential 9. Contours of the new era post-transition economy: they are all different 10. Facing the present by knowing the past