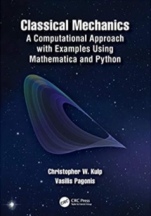 Classical Mechanics: A Computational Approach with Examples using Python and Mathematica provides a unique, contemporary introduction to classical mechanics, with a focus on computational methods. In addition to providing clear and thorough coverage of key topics, this textbook includes integrated instructions and treatments of computation.

Full of pedagogy, it contains both analytical and computational example problems within the body of each chapter. The example problems teach readers both analytical methods and how to use computer algebra systems and computer programming to solve problems in classical mechanics. End-of-chapter problems allow students to hone their skills in problem solving with and without the use of a computer. The methods presented in this book can then be used by students when solving problems in other fields both within and outside of physics.

It is an ideal textbook for undergraduate students in physics, mathematics, and engineering studying classical mechanics.

Gives readers the "big picture" of classical mechanics and the importance of computation in the solution of problems in physics Numerous example problems using both analytical and computational methods, as well as explanations as to how and why specific techniques were used Online resources containing specific example codes to help students learn computational methods and write their own algorithms

Author Biography: Dr. Christopher W. Kulp received his PhD in Physics from the College of William and Mary in 2004 and is currently a Professor of Physics at Lycoming College, where he teaches physics at all levels. Chris has a life-long passion for teaching and, in addition to teaching at several colleges and universities, he has also taught martial arts, high school science, science seminars for K-12 teachers, and a summer kindergarten math program. Dr. Kulp's research interests focus on the fields of nonlinear dynamics, nonlinear time series analysis, and complex systems. He has published more than 20 publications in peer-reviewed journals and conference proceedings and has written two book chapters. More than 10 of his publications have undergraduate co-authors. Much of his work focuses on distinguishing between chaotic and stochastic behavior in time series data. He maintains an active undergraduate research group at Lycoming College, having mentored nearly 50 undergraduate students during his career so far. His current research interests focus on using machine learning to analyze time series and model complex systems. When he is not writing code to solve physics problems, Dr. Kulp can be found reading, playing guitar, and writing music. Dr Vasilis Pagonis is Professor of Physics Emeritus at McDaniel College, Maryland, where he taught undergraduate courses and did research for 36 years. He frequently collaborates with researchers around the world and with his students in his areas of interest, including solid state physics, and specifically in thermally and optically stimulated luminescence (TL and OSL). This is an area of research with applications in archaeological and geological dating, and also in the field of radiation dosimetry. He has taught courses in classical and quantum mechanics, analog and digital electronics and mathematical physics, as well as numerous general science courses. Dr. Pagonis' resume lists more than 140 peer-reviewed publications in international journals. He has been the recipient of several grants, including awards from the Council on Undergraduate Research and National Science Foundation. He is also the inaugural recipient of the John Desmond Kopp Professorship in the Sciences at McDaniel College. He is the co-author of three books in the field of luminescence dosimetry, "Practical and Numerical Exercises in Thermoluminescence," published by Springer in 2006, "Thermally and Optically Stimulated Luminescence: A Simulation Approach," published by Wiley in 2011, and "Advances in Physics and Applications of Optically and Thermally Stimulated Luminescence" published by World Scientific in 2019.

Chapter 1. Foundations of Motion and Computation

Chapter 2. Single-Particle Motion in One Dimesnison

Chapter 7. The Calculus of Variations