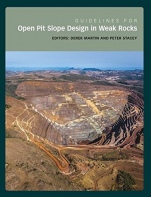 Weak rocks encountered in open pit mines cover a wide variety of materials, with properties ranging between soil and rock. As such, they can provide a significant challenge for the slope designer. For these materials, the mass strength can be the primary control in the design of the pit slopes, although structures can also play an important role. Because of the typically weak nature of the materials, groundwater and surface water can also have a controlling influence on stability. Guidelines for Open Pit Slope Design in Weak Rocks is a companion to Guidelines for Open Pit Slope Design, which was published in 2009 and dealt primarily with strong rocks. Both books were commissioned under the Large Open Pit (LOP) project, which is sponsored by major mining companies. These books provide summaries of the current state of practice for the design, implementation and assessment of slopes in open pits, with a view to meeting the requirements of safety, as well as the recovery of anticipated ore reserves. This book, which follows the general cycle of the slope design process for open pits, contains 12 chapters. These chapters were compiled and written by industry experts and contain a large number of case histories. The initial chapters address field data collection, the critical aspects of determining the strength of weak rocks, the role of groundwater in weak rock slope stability and slope design considerations, which can differ somewhat from those applied to strong rock. The subsequent chapters address the principal weak rock types that are encountered in open pit mines, including cemented colluvial sediments, weak sedimentary mudstone rocks, soft coals and chalk, weak limestone, saprolite, soft iron ores and other leached rocks, and hydrothermally altered rocks. A final chapter deals with design implementation aspects, including mine planning, design implementation, monitoring, surface water control and closure of weak rock slopes. As with the other books in this series, Guidelines for Open Pit Slope Design in Weak Rocks provides guidance to practitioners involved in the design and implementation of open pit slopes, particularly geotechnical engineers, mining engineers, geologists and other personnel working at operating mines.

Author Biography: Derek Martin obtained his BSc in 1972 from Memorial University, his MEng from the University of Alberta in 1983 and his PhD from the University of Manitoba in 1993. He has over 35 years of experience in rock engineering associated with rock slopes, tunnels, caverns and dams. His early years were spent on construction sites for major civil, hydroelectric and underground projects. In 1987 he joined AECL, where he directed the geomechanics research at the Underground Research Laboratory in southeastern Manitoba and was senior adviser to the Director of the Canadian Nuclear Fuel Waste Management Program. From 1995-99, he served as Associate Director of the Geomechanics Research Centre at Laurentian University, working on the deep mining projects in the Sudbury basin. Since 2000, Dr Martin has been Professor in Geotechnical Engineering at the University of Alberta, where he holds an NSERC Industrial Research Chair. Dr Martin is a Fellow of the Engineering Institute of Canada and a Fellow of The Canadian Academy of Engineering. Peter Stacey has 40 years' experience in all aspects of pit slope and mining geotechnical design, project management and review. He holds a BSc Hons. degree in Geology and a D.I.C. from Imperial College, London, and is a registered engineer in Canada and the UK. After working for the Geological Survey of Sweden and subsequently with the Iron Ore Company of Canada as Supervisor - Geotechnical Engineering, Mr Stacey joined Golder Associates Ltd, based in Vancouver, Canada. During his 29 years with Golder, Mr Stacey worked primarily in the areas of pit slope design and the application of geotechnical engineering to the operational aspects of open pit mines. In 2003, he formed Stacey Mining Geotechnical Ltd to concentrate on independent review consulting related to the geotechnical aspects of open pit mining. In this capacity, he currently serves as either review consultant or on the Geotechnical Review Board for several large open pit operations. He also performs geotechnical review for a number of mining and consulting companies.