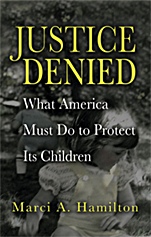 Recent events such as the clergy abuse scandal in the Catholic Church have brought the once-taboo subject of childhood sexual abuse to the forefront. But despite increasing awareness of the problem, the United States has not succeeded in establishing effective means of deterring and preventing it, leaving the children of today and tomorrow vulnerable. Hamilton proposes a comprehensive yet simple solution: eliminate the arbitrary statutes of limitation for childhood sexual abuse so that survivors past and present can get into court. Removing this merely procedural barrier permits the millions of survivors to make public the identities of their perpetrators and to receive justice and much-deserved compensation. Standing in the way, however, are formidable opponents such as the insurance industry and the hierarchy of the Roman Catholic Church. In Justice Denied, Hamilton predicts a coming civil rights movement for children and explains why it is in the interest of all Americans to allow victims of childhood sexual abuse this chance to seek justice when they are ready.

Spis treści:
1. We have failed our children
2. What is wrong with the system
3. The solution is clear and simple, abolish the statutes of limitation for childhood sexual abuse
4. What it will take to act on the lessons learned
5. Barrier #1, the insurance industry
6. Barrier #2, the hierarchy of the Roman Catholic church
7. The other barriers, the teachers, the defense attorneys, and an uninformed public
Conclusion.