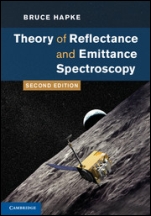 Theory of Reflectance and Emittance Spectroscopy


Reflectance and emittance spectroscopy are increasingly important tools in remote sensing and have been employed in most recent planetary spacecraft missions. They are primarily used to measure properties of disordered materials, especially in the interpretation of remote observations of the surfaces of the Earth and other terrestrial planets. This book gives a quantitative treatment of the physics of the interaction of electromagnetic radiation with particulate media, such as powders and soils. Subjects covered include electromagnetic wave propagation, single particle scattering, diffuse reflectance, thermal emittance and polarisation. This new edition has been updated to include a quantitative treatment of the effects of porosity, a detailed discussion of the coherent backscatter opposition effect, a quantitative treatment of simultaneous transport of energy within the medium by conduction and radiation, and lists of relevant databases and software. This is an essential reference for research scientists, engineers and advanced students of planetary remote sensing.