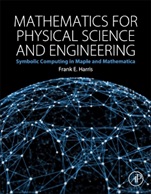 Mathematics for Physical Science and Engineering: Symbolic Computing Applications in Maple and Mathematica

Mathematics for Physical Science and Engineering is a complete text in mathematics for physical science that includes the use of symbolic computation to illustrate the mathematical concepts and enable the solution of a broader range of practical problems. This book enables professionals to connect their knowledge of mathematics to either or both of the symbolic languages Maple and Mathematica.

The book begins by introducing the reader to symbolic computation and how it can be applied to solve a broad range of practical problems. Chapters cover topics that include: infinite series; complex numbers and functions; vectors and matrices; vector analysis; tensor analysis; ordinary differential equations; general vector spaces; Fourier series; partial differential equations; complex variable theory; and probability and statistics. Each important concept is clarified to students through the use of a simple example and often an illustration.

This book is an ideal reference for upper level undergraduates in physical chemistry, physics, engineering, and advanced/applied mathematics courses. It will also appeal to graduate physicists, engineers and related specialties seeking to address practical problems in physical science.

Clarifies each important concept to students through the use of a simple example and often an illustrationProvides quick-reference for students through multiple appendices, including an overview of terms in most commonly used applications (Mathematica, Maple)